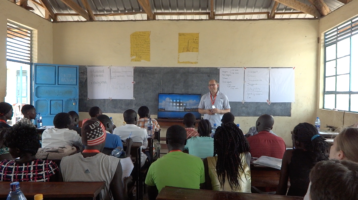 As the director of the Penn Cinema and Media Studies Program, Professor. Peter Decherney is frequently gushing over new ideas and initiatives, which he always turns into reality. On a recent trip, he and a small contingent of Penn students travelled to the Kakuma and Kalobeyei in Kenya to film short documentaries and virtual reality films on everyday life in U.N. refugee camps. The trip gave Decherney firsthand experience combining his interest in film with the emerging technology. “When you see an image, when you watch a film, it is filtered through the filmmaker’s perspective. With virtual reality, viewers can experience a space in a way that is less guided by the filmmaker’s perspective,” he said. This was not Decherney’s first time in the director’s chair. He also directed a short documentary, Filmmaking for Democracy in Myanmar in 2005, which highlights the ramifications of political censorship on the country's film industry.

Off the film set, Decherney is a teacher and scholar who has won numerous awards for his innovative teaching at Penn. He is Professor of Cinema and Media Studies and English and holds a secondary appointment at the Annenberg School for Communication. He also maintains an affiliation with the Center for Technology, Innovation, and Competition at Penn Law School. Decherney’s research focuses on intellectual property (IP) policy, copyright law, and the regulation of Hollywood, and he frequently contributes on these topics to forbes.com. Regarding his research, Dr. Decherney insisted, “Media is central to our culture. I think understanding how media industries work, how they are regulated, how people consume media, how ideas circulate, how society functions is very important. It helps make us who we are.”

Decherney has used his research to benefit students and educators. In 2006, Decherney, along with Katherine Sender and Michael Delli Carpini of the Annenberg School for Communication, and Daniel Rubin and Raquel Ronisky from the Glushko-Samuelson Intellectual Property Law Clinic at the Washington College of Law successfully petitioned the Librarian of Congress for an exemption to the Digital Millennium Copyright Act (DMCA) that would permit media professors to circumvent the encryption of digital media for the purpose of creating clips for educational use. This exemption was later expanded in 2010 to allow students and noncommercial filmmakers to also circumvent encryption to create and use film clips in “new works for the purpose of criticism or comment…”.

Beyond his teaching, Decherney is the author of Hollywood and the Cultural Elite (Columbia, 2005), Hollywood’s Copyright Wars: From Edison to the Internet (Columbia UP, 2013), and Hollywood: A Very Short Introduction (OUP, 2016) and co-edited the journal Critical Studies in Media Communication. Decherney has also used his expertise to file amicus briefs for a number of cases, including the Supreme Court Case of Golan v. Holder in 2011. Speaking to the importance of this work he said, “I think it’s valuable [for courts] to have the perspective of a non-lawyer, a historian, a media scholar, a teacher but also someone who speaks the language of lawyers. Intellectual property in general has become a topic that people realize is popular and is relevant to their lives and people care about the outcome.”

For his latest challenge, Decherney has joined Penn Online Learning Initiative (OLI) as Faculty Director. This will not be Decherney’s first foray into the online education space. In collaboration with OLI, he developed the popular online course Hollywood: History, Industry, Art, available on the edX open learning platform. To date, over 22,000 learners from 163 countries have enrolled in the course. Decherney affirmed, “In many ways online learning is the perfect mix of education and media. Online learning opens up education to new people and allows you to expand the audience.”

You can hear Decherney talk about his experience with his MOOC and challenges film and media online education has faced in the video above.

Written by Loui Luna. Loui is an Education Technology Analyst at the Online Learning Initiative, and a senior in the School of Arts and Sciences and the Wharton School.

Video production by Jennifer Chen and Orchid Tierney. Jennifer is an education Technology Analyst at the Online Learning Initiative, and a sophomore in the School of Arts and Sciences and the Wharton School. Orchid is a PhD Candidate in English.